WHERE TO STAY IN CARTAGENA

THROUGH THE EYES OF SORREL MOSELEY-WILLIAMS

If you are deciding where to stay in Cartagena – look no further than Amarla Boutique Hotel. As soon as the vast wooden front door closes,  you will find yourself tucked away in a true refuge. This is a tranquil sanctum that is a world away from Cartagena’s buzzy Ciudad Vieja throng. Once you take in the scene – the low romantic lighting, the trickle of a fountain, the gentle whirring of a ceiling fan – you will begin to realise that Amarla Boutique Hotel is an abode designed to heighten your senses.

A welcome beverage was brought over while I checked in. The refreshing and zingy red juice called jugo de corozo, was made from a local Caribbean fruit that was freshly pressed. Believed to be perfect for reinvigorating weary bodies and minds, which helped to make the already-easy check-in more seamless.

Amarla’s own story goes back some three centuries to colonial times. Its thick walls designed to keep its residents both cool and protected. I climbed the stone stairs to one of seven en-suites that are named after local birds. I opened my door, and was immediately cocooned. The charming tropical and botanical prints, king-size bed donned with Egyptian threads, white wooden shutters and cool air made it a most conducive place to rest. After a lengthy overnight flight to Cartagena, I had no problem in giving Quetzal, named for a particularly sacred avian, a 15-hour run for its money. Despite being flat out for so long, I still almost ordered breakfast in bed.

‘Amarla’s own story goes back some three centuries to colonial times. Its thick walls are designed to keep its residents cool and protected.’ 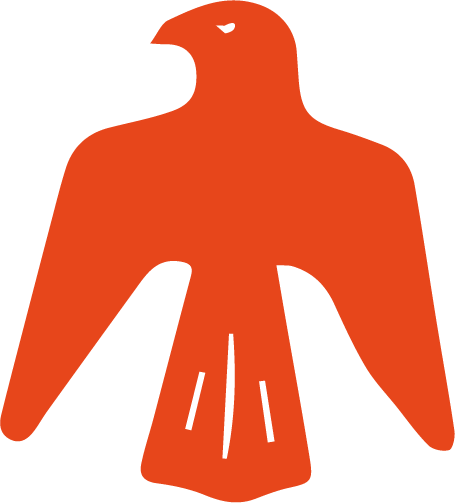 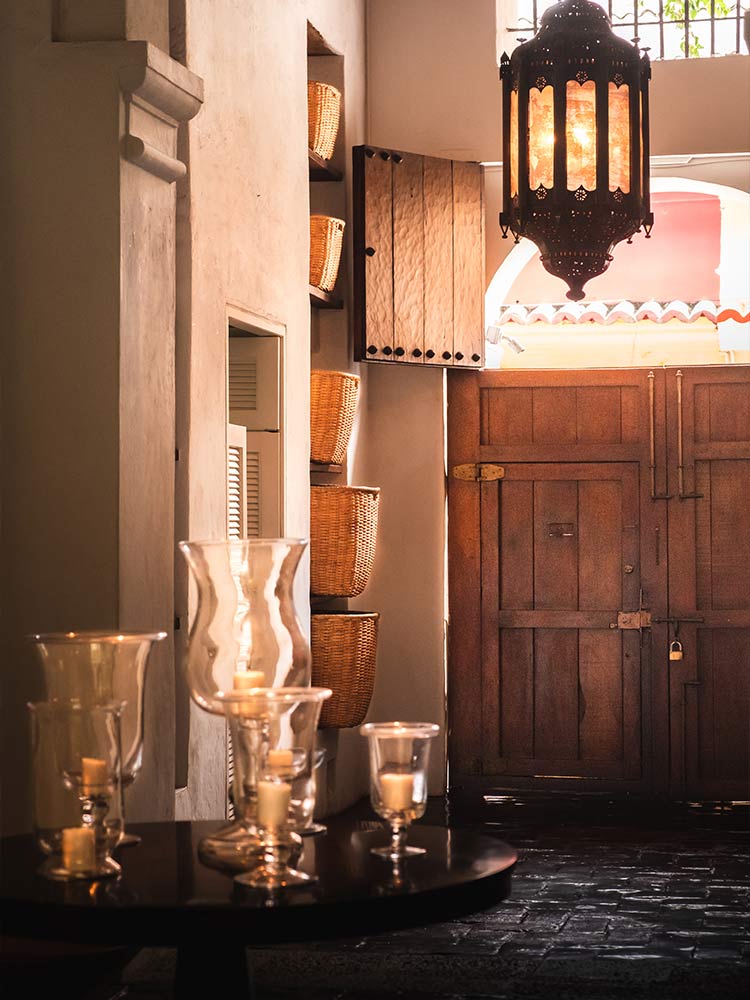 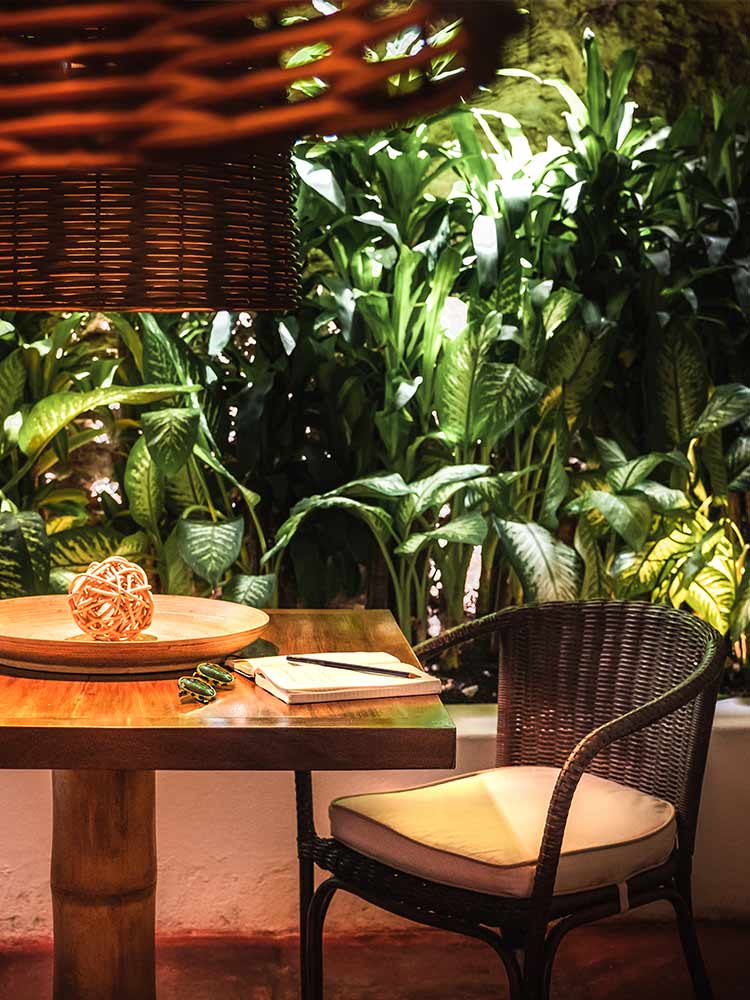 A few hours after the sun has risen, air and water come together in the stylish dining room. Fans wired lightly overhead to keep the humidity at arm’s reach. In the distance I heard the the fountain’s trickle. A gentle, yet a welcoming reminder to me that a new day has begun. The blue sky appears between the two towering palms and accompanies me throughout the course of your day.

In the kitchen, chef Estela Quiroz lovingly slices up fresh tropical fruits such as mango and guava. My lavish breakfast is beautifully presented and delivered with your choice of main course from the menu. I had the egg-stuffed arepas which were delicious, but I was equally tempted by the granola and homemade yoghurt. All accompanied by the Colombian coffee made in a French press is unmissable. As I sat surrounded by tropical foliage, the local aromas and flavours seemed to welcome me, inviting me to kickstart my day. Sated and relaxed, the natural thing for me to do was to head to the rooftop pool.

A light breeze brushed past me from the terrace. A wind so light it could be a feather tickling my warm skin. The vibrant magenta bougainvillea somehow managed to brighten up the bright-blue sky. From inside a wooden canoe other lovingly planted local blooms appeared. The scent of jasmine wafted around me, sometimes coming on stronger depending on the time of day. 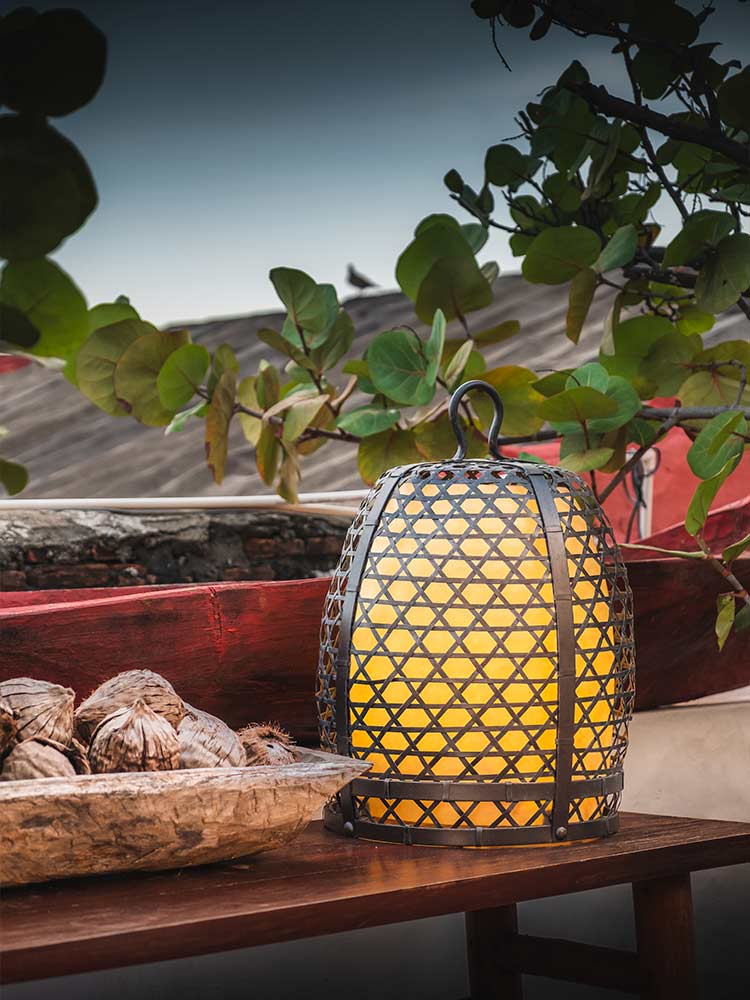 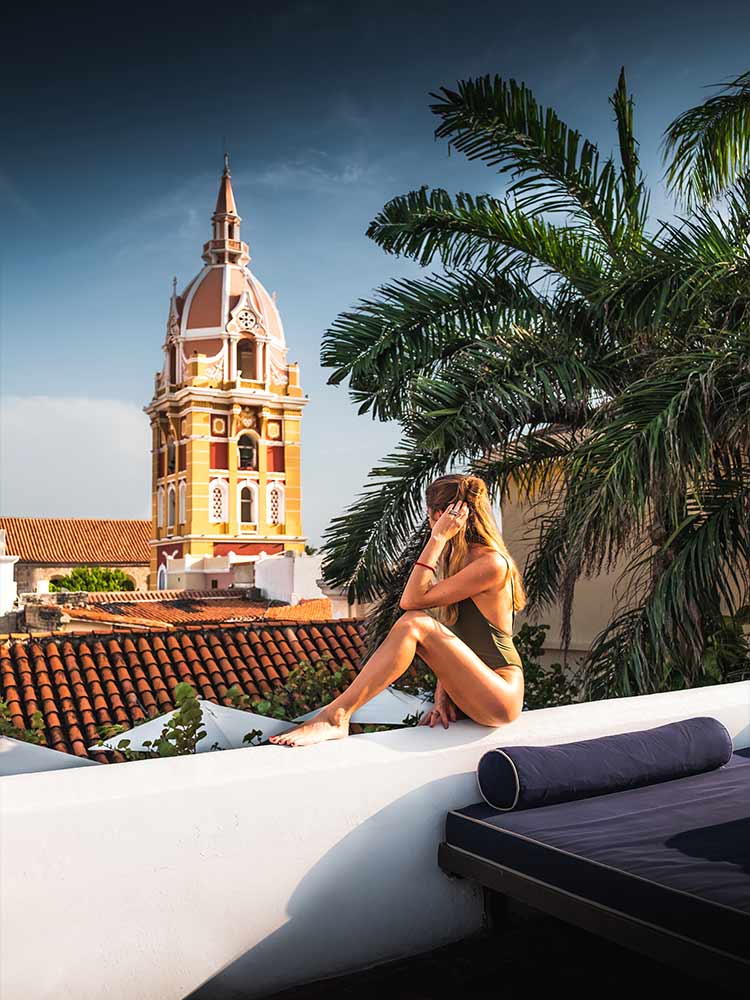 ‘But little compares to the jewel in the rooftop’s crown, a magnificent view of Cathedral Santa Catalina de Alejandría.’

The terrace at Amarla Boutique Hotel offers the most perfect and unique view of Cartagena. The mustard-and-bordeaux steeple of Cathedral Santa Catalina de Alejandría is framed perfectly by old town Cartagena and the city beyond. The panoramic view was unbeatable and easily enjoyed from inside the pool, through the palms or from the cushioned seats.

I cast my mind back to when I first walked through Amarla’s front door, remembering the buzz that I left behind and the tranquility that greeted me. That peace that continued up the stairs and on the rooftop, where it seemed impossible to witness many interruptions. From my comfortable lounger a watched as a hummingbird darted past. It’s tiny wings frantically beating, chirping happily at nectars it found. In the distance I heard the chime of the church bell float by on the wind. The rustling of the twin palms trees leaves. A splash as someone slipped into the cool turquoise waters of the swimming pool and ducked under the fountain to refresh. It seemed to me as if Amarla Boutique Hotel had almost orchestrated this welcome stillness.